As promised to a reader, Jonathan, I am putting up a short post on Tillandsia Houston Cotton Candy.  This is a cultivar of Tillandsia Houston (my original post on this hybrid can be found here), which means it has the same parents as T. Houston but has a unique characteristic which differentiates it ever so slightly from the rest of the same hybrid plants.  This happens naturally, so sometimes within a batch of seedlings from the same plant, you may find one which is extra large, extra small, has more succulent leaves, etc.  One unique plant while great, is unfortunately in and of itself not sufficient to become a cultivar.  Rather you have to wait for it to flower, set seed or pup to check if the next generation also exhibits the same unique traits as the parent plant.  And if you are a professional grower it would probably take several generations to be confident of the stability of the trait.  If you are lucky and the trait is stable, great!  If not, it was likely just a fluke which caused the initial quirk to manifest and that is the end of that.

Well I got this plant labelled as T. Cotton Candy, but as always I am sceptical of tags, particularly those by local nurseries.  Anyway this was one of the plants I picked up in my very first batch of Tills and I had not realised it was a hybrid.  At least not until I got home and did a search on Google!  It is an easy to grow plant, and I have it together with the other two suspected T. Houstons (the care given can be found in that post).  Generally a sun-loving and water-loving plant.  Pics below of its growth over the 18 months or so that I have had it. 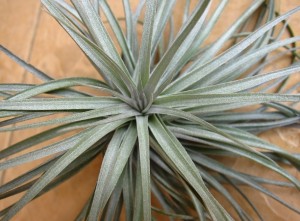 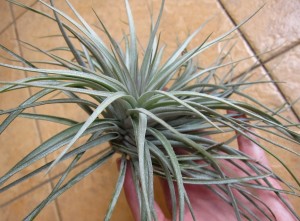 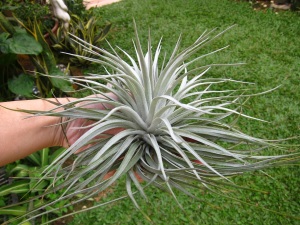 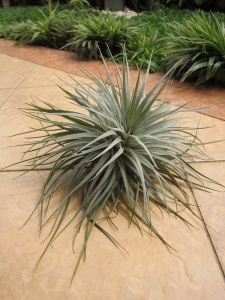 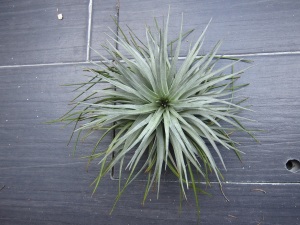 Prompted by Jonathan’s query about the difference between T. Houston and T. Cotton Candy, I did a quick search online and this is what I found.  Based on the Rainforest Flora website (http://www.rainforestflora.com), T. Houston Cotton Candy should have softer leaves than the regular T. Houston.  Which immediately made me want to head out to compare the plants I had, but given I read this at 11pm, I restrained myself.  Well I finally managed to compare the plants I had and errmmm… I am none the wiser.  I found that the so-called T. Cotton Candy actually had marginally stiffer leaves than the other two self-identified T. Houstons.  Although the difference is so minimal that without having both plants side-by-side I doubt anyone would be able to discern any difference.  So perhaps I have two T. Cotton Candy’s and one T. Houston?  In fact the most significant difference between the two is that the so-called T. Cotton Candy is not a good pupper.  Despite being larger than the T. Houstons, it has only given out one rather miserable looking pup, and even that only appeared about a month back – refer immediate pic above.  Maybe some of my readers can use this latter trait as a basis to differentiate the two for me?  All thoughts are more than welcome.  See below for a couple of pictures comparing the two – T. Cotton Candy is the plant on the right.

Well whether I have two T. Houstons or two T. Cotton Candy’s, I am not particularly concerned.  They are all beautiful plants and I am just happy that they are all doing well!

A Modern Approach to Modern Plants